“Its ok, don’t cry. I’m alright now.”
Those are the words that I want to hear from my best friend, on the otherside.

Half of my mind refuses to believe that he’s gone, whilst the other half knows that its the reality, and the two are in conflict with one another.
Every waking day now consists of holes that were once filled with an activity that my friend and I would do. Walks and playtime of course but also in the morning when I awoke and he would be sat there staring at me or nudging my hand. Or when I was writing and he would curl up next to me with these beautiful eyes that always said “My goodness, I love you and I always will!”
I look now into the empty space where his bed and toys once were and then all across the house, only to find the gaps that he has left.

Back in June of this year, Buster was diagnosed with a heart-murmur. He was given the correct medication and for a while he was back to himself. Full of life and as silly as ever. My wife always used to say “He’s like a thoroughbred horse trotting around!” And that was always the case and I think that’s where the nickname Bronco came from.
It was as if sometimes he forgot he was 13 years old and I would struggle to keep up with him, (especially if a squirrel was involved).

I spoke to Buster like he was another human and I felt that he listened to me (mostly). He was always with me wherever I went, and followed me everywhere. He used to like to come up to the hospital with me to see my wife. Not in the ward (obviously, it would prove a little difficult to smuggle a huge Doberman anywhere).
When my wife was moved to J.R Hospital in Oxford, he came with me and was my only company when my wife was in intensive care and I was told that my wife may not make it.
He was there for me to console me and to let me know that everything is going to be ok. Which it was.

We are best friends in the truest sense.
If anyone has read any of the Farseer series or Fools Errand by Robin Hobb, they will be familiar with the relationship between Fitzchivalry Farseer and his Wolf: Nighteyes. I referred to Buster as my Nighteyes.
He was such a special dog, and everybody who met him loved him and said how young he looked for his age.

Of course there were moments when walking him, people would consciously cross the road to avoid him, and one gentleman literally leapt from the bus shelter seat when we passed. Yes, he was big and scary looking but he honestly would never hurt a fly.
Children adored him and he loved the attention.
I recall one day when he went straight up to a little girl of no older than 4, and the immense joy and laughter that Buster gave her was absolutely priceless. Seeing this 35Kg Doberman playing with this child was a sight to behold.
But that was Buster all over.
After a really hard day, he could just give you this look that said “Its not all bad.” And you couldn’t help but smile.

Just over a week ago, I came back from visiting my wife in hospital and he took a few steps then just collapsed. He managed to get up but was a bit stunned.
I went to give him his medication and noticed his gums were white. I immediately called the vets and took him in.
They gave him an ECG and the results showed that he had Atrial Fibulation (Arythmia) and his heart was enlarged and beating at 220bpm. The vet suggested a drug similar to Digitalis.
The drug (digoxin) is highly toxic and it would of meant regular blood tests and some quite nasty side effects e.g anorexia, worsening heart condition, sudden death, and G.I problems.
In the end I discussed everything with my wife and we both decided that we didn’t want to put him through more than he had already been through.
He started to look miserable and he kept giving me this look, one that I knew precisely what it would mean although I could not find speak the words.

On the 25th September 2013 my best friend was put to sleep.
And how I miss him so.
My wife couldn’t be there as she was (and still is very poorly in hospital), so she was on the phone to me the whole time and I talked her through what the vet was doing. She wanted nothing more than to be there for me and for Bronco.
We are utterly heartbroken and the loss of Buster (Bronco), will be felt for a very long time.
I thankyou all again for the kind messages of condolence which I received via Twitter.

Buster lives on in this very blog. That is his eye on the homepage. Ever vigilant ever watching, ever loving, and forever my friend.

Sleep well Bronco, I love you 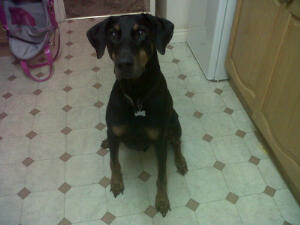