I have recently become a little obsessed with fan theories. For those who don’t know I shall direct you to this link just to get you started and to show you what got me a little obsessed with the idea in the first place. I think some of them are absolutely fantastic and actually make a whole lot of sense and can make you look at a TV series/movies/books etc in a completely different light, and sometimes they can annoy the absolute hell out of you and drive you bonkers for many different reasons. The beauty of these fan-theories are that it doesn’t just begin and end with SFF it can extend to all genres. So, I wanted to throw my own theories into the vast mix that is already out there on the world wide web just for the sheer hell of it. Without further ado here are my two favourite non-SFF fan theories that I came up with. (Yeah, I know. Yay me). 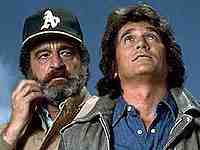 Landon (Bonanza, Little House on the Prairie), and the late Victor French (who also starred in LHOtP alongside Landon). The series lasted 5 seasons from 1984 to 1989 and detailed the work of an angel named, Jonathan Smith (played by Landon) whilst being “on probation” to re-earn his wings. Helped by his human friend and all round top bloke, Mark Gordon (played by French). Together the angel and his helper go around on assignments given to them by “the boss” or as he more widely known, God. Smith and Gordon seek out those who are need in times of loss, despair, anguish and help those who spend their lives helping others. Its a proper tear jerker of a television show and was always one of my favourites when I was growing up. Everything always works out in the end and it does show that kindness can go a very long way. Whilst its obviously riffing on Christian theology, it does it in a way as so not to come across as high-handed and is certainly not preachy.

The theories:
So, throughout the series as I have mentioned Smith is sent to earth on probation to regain his wings and is an angel-in-training. However, he doesn’t seem to have stumbles and manages to sort things out pretty smoothly for all involved. So maybe the angel-in-training is actually Mark Gordon as he is a man who is very set in ways about certain things and Jonathan (at times) can be seen to be teaching his presumed pupil and showing him how to help as an angel should. Also my wife, came up with this little doozy of a theory that concerns Highway To Heaven and Little House On The Prairie- Jonathan Smith and Mark Gordon are actually Charles Ingalls and Isaiah Edwards reincarnated in HtH.

Yes, that incredibly brilliant crime drama set in a fictional county of the UK. So far, I think it is in its 14th series and counting. For those of you who are not familiar with the series it is based on the murder mystery books by Caroline Graham and follows the investigations of DCI Tom Barnaby played by the brilliant John Nettles (Bergerac), within the grisly backdrop of Midsomer. There are some very memorable moments in the series and John Nettles is fantastic as the lead role. If you haven’t seen it I highly recommend it. The theme music alone is absolutely brilliant.

So, something struck me as odd. There are plenty of episodes in which Joyce Barnaby (Tom’s wife) is seen actively taking part in many community activities. OK, so nothing odd there. But! My friends, it would seem that many of these community/social events that Joyce Attends throughout the whole of Midsomer end up with some poor attendee being killed off. Coincidence? I think not. Joyce Barnaby could be a serial killer who targets the inhabitants of Midsomer and its villages/hamlets because she longs to be a permanent fixture of the quiet village life and not living in a town that acts as an anchor to her overly hard working husband. Now, you may say, that if Joyce Barnaby was a serial killer in Midsomer surely her husband being a very clever copper would know? And what about the episodes that Joyce is not seen and doesn’t appear to be involved with whatever the current community activity is? Perhaps DCI Barnaby is, in fact, aware of the fact that his wife is a serial killer but aims to do whatever he can to protect her even if that means threading together any kind of explanation to suit this end. And perhaps the reason she is not seen participating in an event in a particular episode is because she is elsewhere plotting and planning her next kill or to avoid arousing suspicion at that precise time. Joyce has proved she is a crack shot with a rifle (episode Blood On The Saddle) and also is involved with amateur dramatics (Death Of A Hollow Man) and could quite easily disguise herself. Ok, so there you have it my two little contributions. I do have more but I need to mull them over a bit before the grande reveal, so to speak.

Anyway, there are some totally bonkers theories out there and some will absolutely bake your noodle.

2 thoughts on “The Theories Of The Moustached Man”