A great evil, a vast town in a strange world, a changeling, and a rather cool bounty hunter.
mixed all together these create some of the elements that are part of the The Relic Guild. The reader will notice that when you read this book, the featured complicated architectural and world building constructs make you feel a part of Labrys Town and as the pages turn one can see how these all function in Edward Cox’s vast and expanse universe.
Now, I love a maze. And reading The Relic Guild is like walking through a super cool maze. Discovering hidden passages, finding dead ends, not knowing where on earth you are going to end up, and then being chased by Jack Nicholson. Except that The Relic Guild doesnt have Jack Nicholson chasing people through Labrys Town (Although we can but hope for such in the sequel. Fingers crossed.)
In all seriousness Cox has created a superb maze-like and labyrinthian novel.

The reader will discover the world and its intricate inner workings through the eyes of some very interesting characters. Marney the empath, Old Man Sam the bounty hunter, and Peppercorn Clara a prostitute who can also change into a wolf. These three characters we meet at the start of the novel as well as the Illusionist Van Bam who is the Resident of the Timewatcher’s construct ‘The Nightshade’ which is a source of fear amongst the residents- or denizens as they are referred as in the story. The Timewatcher is the creator of magic and pure magic is wielded by the Thaumaturgists who are the most loyal subjects to the Timewatcher. The Timewatcher and her subjects were caught up in a war forty years ago with the Genii who are renegade Thaumaturgists and believe themselves to be the ones who should be calling the shots in the world.
The story takes place forty years on from the Genii War and then a series of flashbacks takes us back to see some of the characters overcome the trials of love and war. Also Old Man Sam is not so old.

The flashbacks are really written and give the reader a deeper understanding of the characters and the Labyrinth and how Labrys Town worked in the past and the comparisons that are drawn but with the focus being our main characters, as they are the magickers keeping everything safe or at least trying to. The book ends with the flashback guild and the current guild both in dangerous situations and leaves a very tasty cliffhanger.
With an ever-looming threat re-emerging the Relic Guild really do have their work cut out for them.

The Relic Guild leaves questions that will hopefully be answered in the sequel/s and there is one character I would really like to have seen more of.
Summed up The Relic Guild is like a twisting, looping, and flipping ride of a cosmic roller-wonder coaster and who knows where the author is going to take us in future books. I found that there was touches of an almost 2000AD influence with The Retrospective (a dangerous no mans land outside the labyrinth) being a kind of Cursed Earth and the novel did, at times, have a Doctor Who feel to it. See what you think.

The Relic Guild is out today (18th sept 2014) and is available from Gollancz Edward Cox is also on twitter @EdwardCox10 and keep an eye out on the blog for an upcoming interview with the author himself. 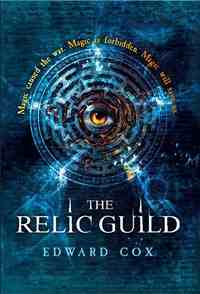 7 thoughts on “The Relic Guild by Edward Cox: Review”