So this is my second Gaiman novel and before reading it I really didnt know what to expect. I recieved this book on Friday and finished it Saturday night and since that time I havent been able to stop thinking about the themes and nuances that colour the plot. My mind has been racing regarding the books meaning, I know that sometimes a story is just a story but the feel of this book was telling me that this was much more. I even woke up the other morning suddenly and had a thought that it could all be an analogy for death and what happens to us when we die and the lead up to it. Although thinking on this more I am more than unsure.

The Ocean At The End Of The Lane begins with a prologue which serves as statement that not all memories are lost some just need a nudge. Then we join our Narrator (who is un-named) on a journey of self discovery as we see him from the perspective of a seven year old and the opening line of the first chapter which made me feel so sad, “Nobody came to my seventh birthday party.”
We follow the narrator, who is incredibly astute for a seven year old, and see how a major part of his childhood panned out. Not to mention his relationship with the Hempstocks who live down the lane, and we see out protagonist begin his blossoming friendship with Lettie Hempstock.

Our Narrator has a fairly normal life, that is until his father’s car is stolen, and from this point it all changes. Life, childhood, and aspects of Innocence when the realisation comes that monsters do actually exist and that their is much more to this world than meets the eye. The Hempstocks almost react to our Narrator as a sort of supernatural family, and accept him into their fold with open arms at all times and offer him guidance without explanation.

It is ostensibly an elegiac and cathartic read, this is coloured with shades and subtleties that honestly make this book like none that I have ever read before. I really liked the fact that Gaiman made the Narrator and his family without names because it showed that this could have been your story as a child.
As a child believing in things is very important and this novel really shows that with zest. There is no greater joy as a child to believe in things that could be seen as otherworldly. An aspect of our childhood that perhaps we should all embrace now and again, to stir the imagination and to awaken the magic in all things that surround us on a daily basis.
The Ocean At The End Of The Lane really touched me deeply and I feel that it will always have a special place for me in my heart and on my shelf.
The Ocean At The End Of Lane is a truly wonderful novel and I do look forward to whatever Gaiman does next. 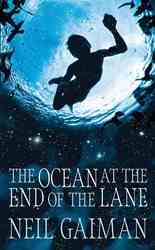 4 thoughts on “The Ocean At The End Of The Lane by Neil Gaiman: Review”