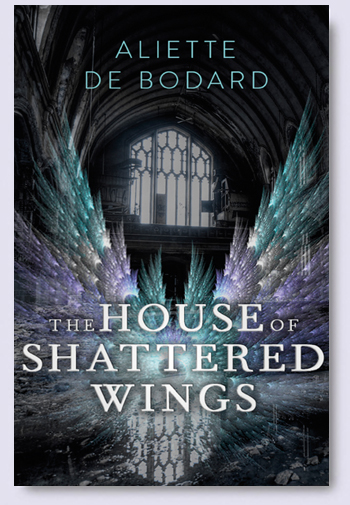 Paris.
The most romantic city in the world decimated by warring houses, and reduced to a shell of its former self. And yet life goes on and the great houses still vie for power.
Clinging to former glories is House Silverspires whose founder, Morningstar, has been missing for years, and the once great house is about to fall further still now that something out of the darkness is stalking its prey.
A powerful Fallen, an alchemist with an addiction, and a young man wielding spells from the Far East. These three very different people may be House Silverspires’ saviors.

Sound good?
Thought so. And look at that cover!

The House of Shattered Wings is a novel that I have been especially looking forward. Fallen angels, warring houses, a magic murder mystery in an urban backdrop.
From the start of this novel Aliette de Bodard draws the reader right into a Paris whose heartbeat can be felt on each page.
This is a novel that is not easy to put down. It requires a few cups of coffee, a healthy supply of biscuits and a few late nights. And my goodness is worth it.
Each wonderfully named chapter draws you in to the lives and dangerous times of the Annamite, Phillipe, the Fallen, Issabelle, and the alchemist and angel-essence addict, Madeline. As well as my personal favorite character Selene, the head of Silverspires. Each character Is wonderfully written and makes the reader feel a part of the story.

The House of Shattered Wings has some incredible moments that will leave you wanting more and I do so wish that I could talk about them but I really do not want to spoil some truly jaw dropping moments.

Aliette de Bodard’s writing is powerful and moving, and her villainous characters are crafted in such a way as to make the reader feel the tension fill the page as they enter a room. The way in which Claire of House Lazarus and Asmodeus of Hawthorn trade barbed words with Selene make the already precarious predicament of Silverspires, and the rest of the characters seem hopeless at times, and really makes for an exciting read.

The House of Shattered Wings is a thrilling, gripping read, that will leave you wanting another hit of angel essence.

The House Of Shattered Wings is out in the UK via Gollancz http://www.gollancz.co.uk August 18th 2015
You can learn more about the author here http://www.aliettedebodard.com and the author can be found on Twitter @aliettedb