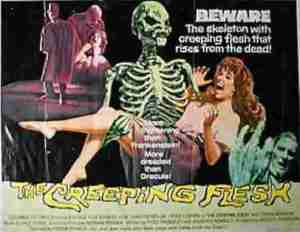 Hello all, and welcome to the special Halloween Ghoul post by David Annandale.
Firstly I would like to thank David for doing this guest post, it is a terrific pleasure to have him on the moustached man’s blog. David is a very busy fellow, if he is not hunting the hordes of Chaos in the Warhammer 40K universe, he is giving lectures on the awesomeness of the cinematic galaxy to university students in the Canadian University of Manitoba. David is also a regular host on the Skiffy and Fanty podcast
He can also be found roaming the halls of the twittersphere @David_Annandale and is an overall splendid chap. So without further ado here is the man himself.

So first, a big thanks to Romeo for inviting me to be a guest on his blog. Given the season, what I’m going to do is talk about one of my favourite films to watch on Hallowe’en. I’ve been a horror fan for most of my life, so choosing one for the year’s Big Horror Night is difficult. During this season, I tend to gravitate more toward the atmospheric, the spooky and the old school, rather than the gore fest (which is not in any way to disparage the latter — if it’s been more than five minutes since I waxed enthusiastic about Martyrs, I need to rethink my life choices). Thus, Night of the Demon (1957) is a frequent contender for Hallowe’en viewing for me. In recent years, however, my go-to choice has become Freddie Francis’ The Creeping Flesh.

Produced by Tigon Pictures in 1973, The Creeping Flesh feels a lot like a Hammer film, what with the Victorian setting, Peter Cushing and Christopher Lee in the cast, and Freddie Francis behind the camera (among other Hammer films, he directed Dracula Has Risen from the Grave, though his greatest contribution to the horror film is likely as the DP for the non-Hammer The Innocents). Cushing plays a scientist who discovers a giant skeleton during his travels abroad. He comes to believe this monster was the literal embodiment of evil. Even more ominously, when exposed to water, the skeleton starts regenerating flesh.

Cushing’s wife is an inmate of Lee’s asylum. Terrified that his beloved daughter (Lorna Heilbron) will go down the same path, he injects her with a solution of the partially reformed creature’s blood, reasoning that he is inoculating her against evil. Things, as they say, Do Not Go Well.

So why do I love this film so? It has the great period atmosphere of British Gothics of that era (inaugurated in 1957 by The Curse of Frankenstein, but very much in its twilight in 1973). It has Cushing and Lee at daggers drawn, which is always entertaining. And the full manifestation of the monster is a sight to behold. But conceptually and thematically, the film is fascinating and rewards multiple viewings.

However much they are at odds, both Cushing and Lee’s characters are quintessential patriarchs, utterly convinced they belong at the top of the Great Chain of Being, and that they Know Best. And for these men, female sexuality is indistinguishable from insanity. In his desperate attempt to control his daughter’s sexuality, Cushing winds up destroying her, unleashing a damaged, violent form of the very thing he sought to repress. So not only does Evil itself have a towering physical presence in the film, but the brutal mechanisms of patriarchy are given explicit representation as well.

Furthermore, the film implies that the horrors of the twentieth century are precipitated by the evil released by Cushing. And though Evil has an external reality, its release is due to the fears and privileged beliefs of Cushing. This Gothic family drama, then, is a reminder that wars and other social cataclysms do not come out of nowhere, however much we may delude ourselves otherwise.

A cool monster. Great atmosphere. Wonderful spookiness. Icons of the field doing their thing. And, if you will forgive me, plenty of thematic meat on its bones. How could I do anything but adore The Creeping Flesh?

Thanks again David! and I hope everyone has an enjoyable Halloween.

David Annandale brings doom to untold billions as a writer of Warhammer 40,000 fiction for the Black Library, most recently in the novel Maledictus, and The Damnation of Pythos. As the author of the horror novel Gethsemane Hall, he hopes to end sleep for you forever. During the day, he poisons minds as he teaches film, video games and English literature at the University of Manitoba. If you have any fragments of hope still left, you can have them crushed at his website or by following his Twitter account.

Please check out Davids publications over at http://davidannandale.com/published-works/ and make sure to drop him a line on the twitter @David_Annandale