Greetings fellow insomniacs! Last week I reviewed the epic fantasy Heartwood by Freya Robertson, and this week the lady herself has kindly done a guest post for SMOAWGMM readers.
So without further ado I shall hand you over to Freya.

Hi, and thanks for having me on the blog today!

As a topic for the post, you asked me about the magic systems behind Heartwood, and whether the gaming I do has any influence on the way I write about magic in my fantasy.

The Lord of the Rings and subsequent novels like Brooks’s Shannara series pretty much covered magic items, and Harry Potter has monopolised the wand waving, Latin-word casting form of magic, so anything written with these features is now seen as a copy. It’s a challenge to find a different way to represent magic in a fantasy novel.

Does a fantasy novel even need magic? I play MMORPGs like World of Warcraft and Guild Wars 2 and tabletop games like Warhammer Fantasy Battles, and magic plays a big part in these. The expansion to the eighth edition of Warhammer called Storm of Magic brought even more emphasis to magic in the game, and I loved exploring the numerous schools of magic with the wizards. Warhammer is great because it doesn’t take itself too seriously, and half the fun is the possibility of the wizards blowing themselves up! But playing fantasy games in all their various forms reinforces the importance of magic in the genre. We can set our story in a quasi-medieval setting, give the characters quests and create maps of vasts lands until the cows come home, but it’s the introduction of some kind of magic system that lifts the story out of being some kind of historical-lookalike and into the fantasy genre.

I decided when writing Heartwood that although I wanted it to be a recognisably traditional epic fantasy in many ways, I also wanted to give it a more modern twist. So it doesn’t have elves, orcs or dwarves, and there is also much more of a gender balance than was usual in the medieval period. The other way I decided to make it different was in the way magic was used.

In Heartwood, there are no magic swords or indeed any magic items, and no wand waving. Instead, the supernatural element was born through my interest in nature religions such as paganism and Wicca and healing systems like Reiki. In the story, the Arbor—the tree at the centre of the fortified temple of Heartwood—controls the flow of energy across the land through its roots, and a major theme of the story is the discovery that the land and the people are in fact one, and the reason the land is failing is because there is war between the various societies. This is also an Arthurian idea, “a king without a sword, a land without a king,” the notion that somehow the citizens of a country are somehow linked with the fertility of the land. Behind this is a veiled reference to global warming and the fact that—now we surround ourselves with concrete—perhaps we have lost the link with the earth that our ancestors once had.

Magic in Heartwood is related to a character’s personal energy, and is linked with the idea that we can affect the living things around us with our energy flow. The people of Anguis discover there is much more to their world than what they see around them, and they learn that the only way for them to keep the land fertile and to hold back the bond that stops other elements from invading is to understand and cultivate their control over the flow of energy through the land.

Thank you Freya! Heartwood is out now from Angry Robot Books. You can find out more about Freya on her website http://www.freyarobertson.com/ and she can be found on twitter @EpicFreya. 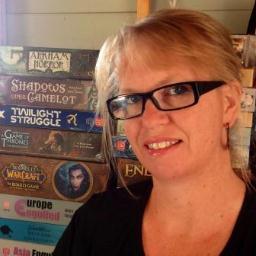